Home » Bevis Centre » About the Farm

The Ice Ages
The valley at Penllynin is U-shaped and was formed during two Ice Ages. When we dug into it to form the lake we cut through beds of grey clay formed from ground-up slate. The beds were 1-3 metres deep each, separated by a thin brown layer consisting of crushed woodland from the interglacial period. The deep ravine at the bottom has been cut by the stream in the current inter-glacial period. Higher up, the land has bedrock of shale, often with a shallow topsoil. The bank at Cwmduhen slopes 100 metres down to the river Cennin and is stable because of the bedrock.

Post-Ice Age
Lying at 100-150 metres above sea level, our land would have been covered in broad-leaved woodland with oak and ash predominating after the last Ice Age. We still have pockets of the original forest plants including heather and blueberry, surviving on slopes where the sheep could not reach. Wolves roamed here, as well as bears and beavers.

Neolithic Period
The nearby Preseli Hills were the source of bluestones used to build Stonehenge. There are Neolithic hill forts and enclosures there which we come across out hawking. The climate was warmer then and these hills were farmed and also used as highways and drove roads. In contrast, our farm on the lower ground would have been forested and home to isolated farm settlements. Carmarthen itself is the oldest town in Wales, being Roman in origin and a conduit down the river Towy to the sea for travellers and goods. Merlin the Magician is rumoured to bide here in the hollow hill and Carmarthen means Caer Myrddin – Merlin’s Town.

Medieval Period
Steep banks with laid hedges on top were made to enclose the fields and keep in the stock so that they did not require full-time shepherding. The lanes on the slopes have eroded over the years and cut deep, forming holloways down to the bedrock. Tolls were raised to pay for the upkeep of the roads into Carmarthen. When these tolls became too punitive, the local people protested violently and to avoid identification the men dressed as women with the leader being ‘Rebecca’. The Rebecca Rioters came along our lane in 1842, heading towards town. 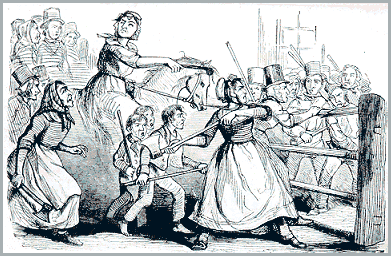 Recent History
The farm is in what was the Comote of Derllys until the territorial re-organisation of Wales in 1536-42 when the district became the Hundred of Derllys. In 1725 the Derllys Estate was sub-divided and the farm remained an outfarm for Derllys Mansion. The spring at Penllynin provided the water by way of a leet to the mill pond at Derllys, and there was an old road between the two farms. Derllys farm has now been developed as an 18 hole Golf Course with Clubhouse and restaurant.

We believe that in 1750 the Penllynin house comprised a single story one or two roomed dwelling. By 1800 it had had an upper story added, and two pigsties on the south elevation. There is a well outside the front door dug into the shale, and a double stable for the horse and cattle. In 1952 the house was extended to the north and in 1997 we extended it to the south. We removed the old cowbyre to build the IWC office building in 1989.

In the 1800s there were two additional houses on the Penllynin property; one was a single man’s hut in the wood opposite Penllynin and one was Ffynnon Las Cottage on our north bank over the road. Almost all traces of them have gone now.

The other three farmsteads are also old. The Blaencwm and Waunlas farmsteads, and Dandderwen Cottage appear on the 1830 map. Cwmduhen farmstead appears to have originally been in Merlin’s Meadow by the river before moving to its current position, but this may be a surveying error.

Land Use
The farm has over 6 km of walk routes, most of them mown tracks through woodland. Also with 46 fields and all sorts of hills and gullies, to walk the whole farm in one day takes some doing. We have cattle and sheep here and, in summer, a few pigs. We make up to three cuts of silage and some haylage. We have no arable and seldom make hay any more.

An old green lane on the farm

Farm Facts
You’d be amazed how much information modern farmers have to provide for the various authorities! Every last detail is mapped by aerial photography and satellite. But these office folk don’t always get it right – our septic tank which we dug in 1983 is shown as a ‘historic monument’! Should we charge people to enter?!