A 5 year project to study the geographic variation in phenotype, genotype and migratory behaviour of Peregrines breeding in five study areas of the Eurasian Arctic over the period 2009-13. 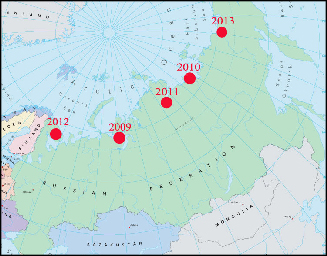 1.The Peregrine breeding populations in the three areas surveyed to date (Yamal Peninsula, Lena Delta and Eastern Taimyr) are healthy with no indication of a decline. In the tundra zones and river channels of each study area most suitable nesting areas were occupied by breeding pairs.

2. In the tundra zone of Northern Siberia Peregrines have an abundant prey supply, where they feed mainly on waders, waterfowl, seabirds and passerines.

4. The migration pathways indicate that Peregrines tend to avoid large sea crossings, which does indicate that some channelling of autumn migration can occur in coastal areas such as along the northern Black Sea coast and along the coasts of Caspian Sea, Red Sea and the Arabian Gulf.

5. Factors that determine the direction and distance of migration are not known but undoubtedly involve both a genetic and environmental component.

7. Major environmental changes in their Arctic breeding range, possibly as a result of global climate change, has the potential to affect Peregrines (perhaps by influencing population trends and/or migratory behaviour). 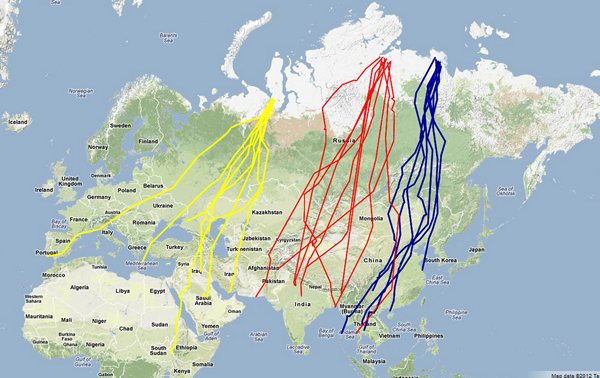