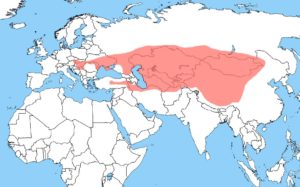 Austria
Austria represents the westernmost breeding range limit of the Saker, where it is found in the open agricultural landscapes in the northeast of the country

Bulgaria
Probably now extinct as a breeding species in Bulgaria.

Czech Republic
Restricted to Moravia in the southeast of the Czech Republic, bordering Slovakia and Austria, where they breed in open agricultural landscapes and alluvial forests.

Georgia
Breeds in semi-arid areas and steppe in the Iori region, southeast Georgia.

Hungary
Breeds mainly in open agricultural and steppe landscapes of the Carpathian Basin and in foothills of the hill ranges bordering Slovakia and Austria.

Moldova
Breeds in the steppe zone close to the Ukrainian border and possibly in the river flood plains of the Prut and Nistru.

Poland
A few breeding recent records from Silesia close to the Czech border.

Russia (west of Ural River)
Breeds in the agricultural and steppe landscapes of the Rostov region and agricultural floodplains of the Don and Volga river valleys.

Serbia
Breeds on the open agricultural plains of the Vojvodina Province and also possibly in highland plateau steppe habitat in the southeast of the country.

Turkey
Breeds in steppe and mountain foothills of central and eastern Anatolia.

Kyrgyzstan
Breeds on cliffs in foothills and mountainous regions across the country.

Uzbekistan
Breeds on cliffs in lowland hills, along rivers and in open steppe throughout the country.

Turkmenistan
Breeds on cliffs in the southern mountainous regions and in the desert steppes of the north.

Tajikistan
Widely but sparsely distributed across the country, where it nests on cliffs in mountain foothills and in open steppes.

Iran
Little recent data available but probably breeds in mountain foothills in the north of the country.

Afghanistan
Little recent data available but probably breeds in the mountains and foothills in the north of the country.

Kazakhstan
Breeds in desert steppes of the Trans-Caspian region and eastern Betpak-Dala, in mountain foothills along the Tien-Shan mountain chain bordering the south and east of the country and in forest-steppe habitat in the north.

Mongolia
Breeds in central and eastern steppe zone, in desert steppe of the Gobi and in forest steppe and mountain steppe of the north and west of the country.

China
Breeds in steppe and desert steppe habitats of Inner Mongolia, Gansu and Xinjiang, foothills and mountains of Tien Shan, Altai Mountains and Kunlun Shan, and across the Qinghai-Tibetan Plateau.

Russia (east of Ural River)
In the Asian part of Russia the Saker Falcon breeds in steppe and forest steppe zones, and in mountains and foothills across western, central and eastern Siberia. Their distribution here represents the northern limit of the Saker Falcon’s breeding distribution range.