Migration is the biannual movement of Sakers between their breeding and wintering areas. Saker Falcons are partial migrants i.e., some individuals within a population migrate whereas others do not. Adult territory holders tend to have less inclination to migrate than others, especially juveniles. What causes variation in migration behaviour within and between populations is unclear, though it is probably determined by both genetic and environmental factors.

Sakers do not form large migratory flocks like some other migratory birds of prey, nor do they appear in large numbers at migration bottleneck sites because their migration occurs over a broad front and over an extended time period.

Map showing general direction of autumn migration routes of Sakers. These are indicators only as Sakers tend not to congregate on particular flyways. 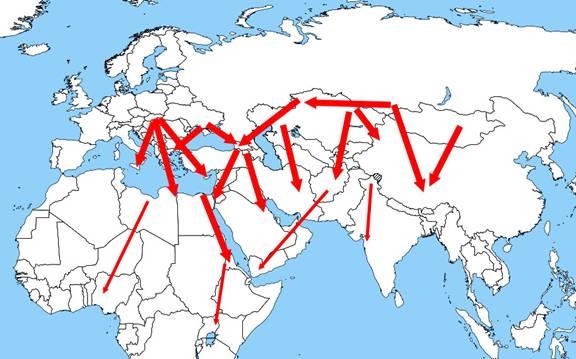 Data on Saker Falcon migration is still quite limited but information on migratory movements have come from direct observations of the arrival/departure of birds from particular areas, from ringing returns and more recently from satellite tracking studies. The map shows presumed migration links between breeding and wintering areas but it must be borne in mind that Saker Falcon migratory behaviour is very variable.

Saker Falcons that migrate from breeding areas in Europe can winter in the Mediterranean region, North Africa and sub-Saharan Africa north of the equator. The EU Life Project on Saker Falcons in Hungary and Slovakia has a website with maps tracking the movements of satellite tagged Sakers.

It is thought that migratory Sakers in central Eurasia, Kazakhstan and western Siberia move to the Middle East and Arabian Peninsula. There are examples of Sakers ringed in Ukraine and Kazakhstan being reported from the Arabian Peninsula, though it is not certain that all the birds were actually trapped there. A juvenile from northern Kazakhstan was later recovered in Georgia. There are also proven movements from eastern Kazakhstan to western China.

Many migratory Sakers from Mongolia, central and eastern Siberia overwinter on the Tibetan Plateau, where a large breeding population also exists.