Sakers are large falcons exhibiting predominantly dark brown plumage above, whilst the underparts are generally white in appearance with dark brown spots or streaks, typically lighter on the breast and heavier on the flanks. The Saker is polymorphic, which means that individuals can vary in size, shape and plumage colour. This individual variation is weakly associated with geographical location across its global breeding range, though there is a cline (general gradation) from smaller, darker birds in the west to larger, lighter and dorsally barred birds in the east. These ‘western’ and ‘eastern’ forms are conveniently termed as subspecies: cherrug and milvipes respectively (see Taxonomy).

Head is pale buff to white, mottled on the crown and nape with brown and to a lesser extent on the facial disc behind the eye. There is typically a pale supercilium and an indistinct brown moustachial stripe. Upper parts are brown with a lighter fringe to the scapulars and coverts. Underparts are are generally white with dark brown spots or streaks, these being lighter on the breast and heavier on the flanks. Primaries are darker than the coverts and when perched do not extend beyond the tail. In flight, the undersides of the wings show a contrast between the barred flight feathers with the darker underwing coverts. Tail is brown above with spots or bars of buff, whilst the underside typically has a barred appearance. Bare parts of cere and feet are yellow.

Plumage is generally similar to the adult male but tends to be more heavily mottled on the head and underside. Sexes are best distinguished by their comparative size, with females being larger.

Can be distinguished from adults by their more heavily streaked underparts, plain dark brown upper parts (the lighter fringes of scapulars and coverts are typically less distinct) and broad pale tip to the tail. The bare parts of juvenile birds are blue-grey in contrast to the yellow ceres and feet of adults.

Birds typically begin moulting their juvenile plumage from May on wards in their second calendar year (the first calendar year being the year when the bird hatched). The complete moult can continue through to the third calendar year at which time the bird attains its full adult plumage. Depending on the extent of moult it is difficult to age birds accurately but the best indicators are the presence of unmoulted juvenile feathers in the upper parts and pale green-yellow legs.

Typically differs from western cherrug form by having a paler head, less heavily streaked on the crown, sometimes with a distinctly rufous-tinged nape, and a more distinct moustachial stripe. The upper parts have a barred appearance due to broad buff or rufous-brown tips to scapulars and coverts. The underparts are less heavily marked tending towards spots rather than streaks on the breast and with a more barred appearance on the flanks. 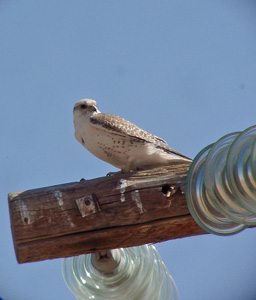 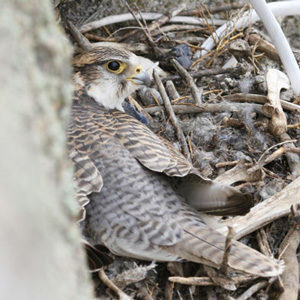 As milvipes male but tends to be more heavily marked on the underside and significantly larger. 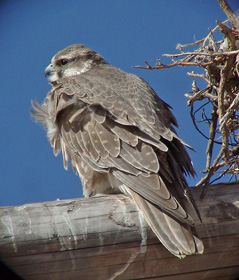 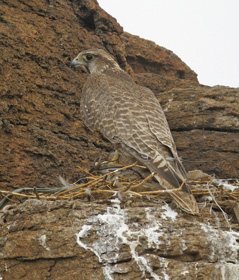 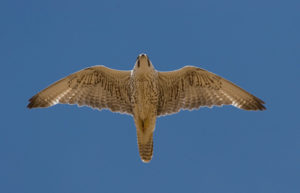 Similar to juvenile cherrug but they can show some paler brown or rufous scalloping and barring on the upper parts due to lighter fringes and tips of scapulars and coverts. 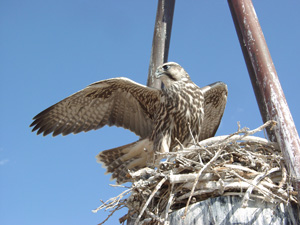 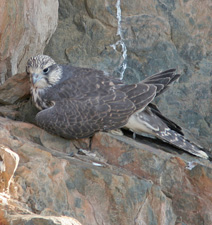 Timing of post-juvenile moult similar to that of cherrug and distinction between juvenile and adult feathers on the upper parts is more distinct due to the broader rufous tips typically found on adult milvipes scapulars and coverts. Bare parts change from blue-grey to yellow during period of post-juvenile moult. 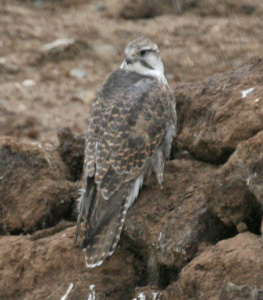