Saker Falcons are popular with Arabian falconers as they are excellent hunters and are well adapted to desert climates. Arabian falconry creates a significant demand for Saker Falcons, which is largely met by international trade.

The Mongolian trade in Saker Falcons has existed since the mid 1990’s, with the majority of wild-caught birds being exported to Arab states for falconry.

The trade in Saker Falcons is regulated by CITES (listed in Appendix II).

The Mongolian government now sets an agreed quota for the number of Saker Falcons that it exports each year. However, over the years the scientific basis for this quota was unclear and the trade has been subject to review and suspension by CITES because the Mongolian government has not been possible to demonstrate that its export quotas would not have a detrimental impact on the Saker population. CITES have now withdrawn their suspension on condition that Mongolia maintains a export quota of 300 birds in 2009 and 2010, whilst establishing a system of sustainable harvesting based on productivity of artificial nests. 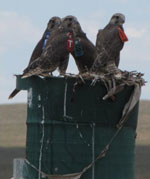 The Artificial Nest Project is the culmination of seven years research undertaken by International Wildlife Consultants (UK) Ltd and their Mongolian research partners, the Wildlife Science and Conservation Center. This research has been undertaken within the framework of a Memorandum of Understanding signed between the governments of Mongolia and Abu Dhabi (UAE), and has been funded by Abu Dhabi. The aim of the research is to establish a programme whereby Saker Falcon conservation can be achieved through sustainable use. The establishment of such a system requires sound scientific data on Saker productivity combined with a rigid and transparent system of regulation for the harvesting.

The Mongolian steppe has vast areas of flat or undulating grasslands with abundant prey but very few nest sites for Saker Falcons. This habitat is occupied by Sakers but they do not breed. By erecting artificial nests we can provide nesting sites, enabling these non-breeders to breed and produce young i.e., we can artificially increase the breeding population in the steppe zone by providing nesting sites.

Initially we erected a grid of 100 artificial nests of four different nestbox designs, spaced at 2 km intervals to determine which design best suited Saker Falcons. Data on occupancy levels and breeding success was collected over four breeding seasons, during which time rodent prey was in very low numbers across the whole grid area. The results showed that Saker Falcons preferred the closed-box designs and bred at a density of 5 bp/100 km2. 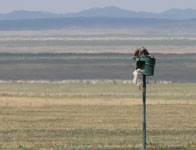 We created a second series of artificial nests, all using the the closed box design, but placed them at much closer intervals of 1 km in six separate blocks of 25 nests (150 in total). These blocks were distributed across an area of steppe with high rodent densities. Data was collected on occupancy and breeding success over three field seasons. In these grids Sakers were able to breed at high density (17 bp/100km2) and their nests were very productive, producing an average of 3.5 fledglings per nesting attempt.

The findings of the research program were discussed with the Ministry of Nature, Environment and Tourism in Mongolia and it was decided that artificial nests could form the basis of a sustainable harvest of Saker Falcons in Mongolia. Subsequently, with funding from Abu Dhabi, we have decided to expand the program and to erect an extra 5,000 artificial nests, in 20 blocks of 250, distributed across the central steppe of Mongolia in 2010. This field-scale trial will involve monitoring to determine occupancy levels and productivity rates from 2011 onwards.

We predict that by 2015 these 1500 artificial nests can be occupied by 500 breeding pairs and produce at 1500 chicks. At present the Mongolian Saker Falcon export quota is fixed at 300 birds until 2011. In the future the Mongolian government could, use the artificial nest productivity rates to set their annual export quotas. In order to achieve conservation through sustainable use of Saker Falcons it is necessary to establish a scientifically sound methodology for establishing harvest quotas, that take into account the age and sex ratio of falcons caught for trade together with information their natal origin (only a proportion of birds caught are expected to actually come from the artificial nests themselves). We are working closely with the Mongolian government on the development of their policy in relation to the Saker trade.

The artificial nests are made from secondhand orange juice barrels which are purchased in Ulaanbaatar. In our workshop, barrels are cut in half and a hole cut in the side. The bottom lip of the entrance holes are bent under to give the birds a rounded edge to perch on and a blunt frame is created to prevent damage to the bird’s wings.

Lids are attached to make a closed box and three metal strips are added to create a ‘crown’. This crown enables Upland Buzzards to build their nests on the top of the barrels. All 5,000 nests were erected by July 2010.

Areas where artificial nests have been erected in Mongolia 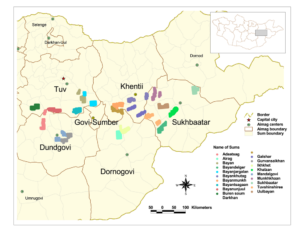 In 2012, the second year of the “5000 Artificial Nests Project”, we recorded 347 Saker Falcon nests, with a further 33 nests in our pre-existing experimental areas of 250 artificial nests. In total we monitored the breeding success of 380 pairs of Sakers occupying our artificial nests. However, this is a minimum estimate because nests that had failed prior to our first monitoring visit (between 1st and 15th May) are not counted; the calculated average laying date was 5th April.

We further recorded the breeding of 905 pairs of Common Kestrels (Falco tinnunculus), 298 pairs of Upland Buzzards (Buteo hemilasius) and 269 pairs of Ravens (Corvus corax). Again, these are minimum estimates as birds that laid and failed between the first (1st-15th May) and last monitoring visits (25th June to 9th July) were not counted.

For artificial nests to provide a long-term benefit for Saker Falcons in Mongolia they need to generate an income to pay for their maintenance, replacement and for nest monitoring. To achieve this aim we are currently looking at a range of ‘services’ provided by the artificial nests and developing ways of obtaining a financial income in return.