History of Saker Falcons in Bulgaria

The Saker Falcon was a common bird in Bulgaria in the past, distributed in open landscapes. Today it is extinct as a breeding species. The last successful breeding attempt was recorded in 1997 and the last active nest in 1998 – the pair laid eggs but failed to raise chicks.

The reasons for the species decline are believed to be mainly anthropogenic, acting over a period of several decades. Persecution of birds of prey in the early part of 20th century seems to have had a great impact on their population. Massive changes in agricultural practices dramatically altered the Bulgarian landscape. Habitat loss occurred through abandonment of lowland grazing or conversion to arable crops, which in turn contributed to the decline of important prey species for Saker Falcons such as the European Souslik and various grassland birds.

It is likely that organochlorine pesticides had some detrimental impact on the Saker Falcon population in Bulgaria, and may have significantly contributed to its disappearance in lowland agricultural regions.

In the 1970’s there was a resurgence in falconry in western Europe, which was accompanied by an increased demand for falcons. Falcons were needed not just for falconry but to stock the newly established breeding centres that were being created to meet the demand for falcons from European falconers.

During the 1970’s to 1990’s Saker Falcons and Peregrines were taken from many nests in central and eastern Europe, reducing the breeding success of wild populations that had already been badly affected by pesticides and other negative factors.

In 2005, Saker Falcon breeding numbers in Bulgaria were estimated to be less than 5 breeding pairs, though no nests had been found since 1998. Teams from several organizations, coordinated by the Institute of Biodiversity and Ecosystem Research (IBER), performed large scale surveys across Bulgaria at former breeding sites and in areas with suitable habitats. More than 10% of Bulgaria was investigated. Over 500 raptor territories were revealed, Long-legged Buzzards, Golden Eagles, Ravens, Peregrines, and Egyptian Vultures were found but no breeding Saker Falcons were detected. To date, no Saker nests have been reported in Bulgaria and the species is considered extinct as a breeding bird.

Three specialist raptor meetings were organised in Bulgaria during 2009-2010. The first was an international meeting held in 2006 aiming to:

A feasibility study regarding a Saker Falcon reintroduction programme in Bulgaria was undertaken and published on-line. Multidisciplinary and international teams participated in the preparation of the feasibility study including The Central Laboratory of General Ecology, Green Balkans Federation, International Wildlife Consultants (UK) Ltd, Institute of Zoology, National Museum of Natural History and the Helmholtz Centre for Environmental Research. The feasibility study is based on IUCN criteria for reintroduction and includes the following issues:

Central Balkan Mountains area (Central Bulgaria) was assessed as the best place for pilot releases of Saker Falcons. Several activities were implemented prior to the release of the birds.

A pilot release project was initiated in 2011 using birds hatched in captivity at breeding centres in Germany and the Czech Republic. Six young Saker Falcons were released in the Central Balkan National Park using the hacking method. They were equipped with satellite transmitters so that we could collect data on their movements and survival. Four days after the release the birds were recorded hunting insects in the air and on the ground near the hack site. Unfortunatelly all six birds stopped transmitting within a month of release. Three were recorded dead for unknown reasons, one was probably shot in Serbia but the body was not found to confirm this. We could not find carcasses for the other two birds and they probably did not survive. The reason for the early death of the birds was most probably due to a late release from the hack.

In 2012 another group of four young Saker Falcons were released from the same spot. The birds spent four weeks in the hacking area, completing their growth and development after leaving the hack cage, improving their flying skills and developing their hunting skills. On 3rd of July all the birds started their post fledgling dispersal. Two Sakers made long excursions and came back to the vicinity of the release area suggesting they recognize the hack area as their natal home. Five weeks after dispersal one bird reached Russia (near Moscow) and established two Temporary Settlement Areas (TSA) during its travels. One Saker established a TSA in Romanian Dobrogea, another Saker established a TSA in Central Bulgaria in the vicinity of Stara Zagora and the fourth bird settled in eastern Ukraine.

By the middle of September 2012 the birds in Russia and Ukraine left their temporary settlement areas and started moving south, this movement was probably caused by the cold spell in Eastern Europe. One flew south round the eastern coast of the Black Sea through Georgia and the other flew south-west and back to Bulgaria. The bird which inhabited central Bulgaria is still around the town of Stara Zagora, although it has begun exploring other distant regions of Bulgaria. The fourth bird stopped transmitting in Eastern Romania in August 2012. The fate of this bird is unknown but the engineering data of the satellite tag suggest tag-failure rather than bird’s death.

The pilot release aims not only to support the species restoration to the country but to obtain valuable information about the hidden threats to the species in Bulgaria; collect data about the survival of the reintroduced birds and collect information movements and habitat use. 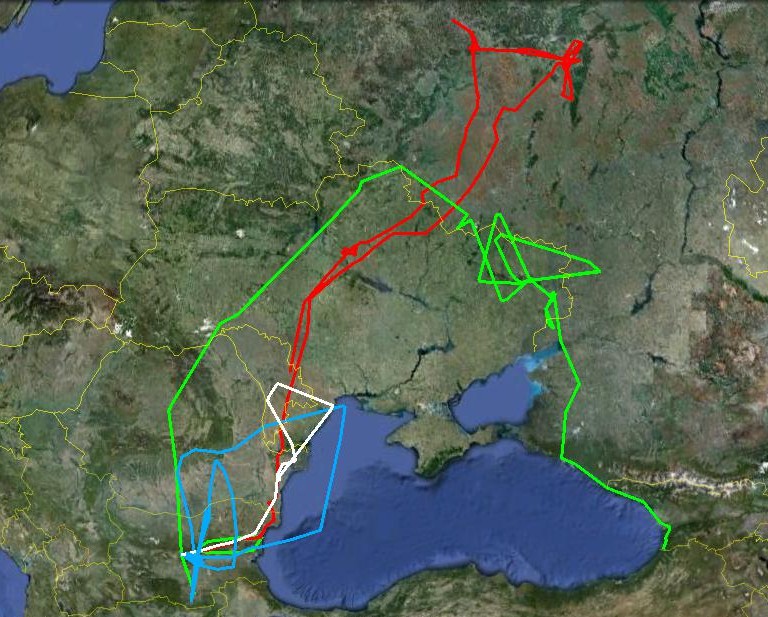 Movements of four Saker Falcons released in May 2012