Saker Falcons are classified as ‘Endangered’ on the IUCN Red List and listed on Appendix II of CITES.
The species is also listed on Annex I of the EU Birds Directive in Europe.

In the 1990s the breeding population of Saker Falcons underwent a rapid decline in parts of its central Asian breeding grounds. Following this decline its Red List status was upgraded to ‘Endangered’ in 2004. The change was made on the basis of a status assessment made by Birdlife International, which concluded that the Saker Falcon faced a very high risk of extinction in the wild. Birdlife International estimates that the global Saker Falcon population has undergone a decline of between 53-75% over three generations (15 years).

The criteria upon which the Saker Falcon was classified as Endangered is given in
Box 1: 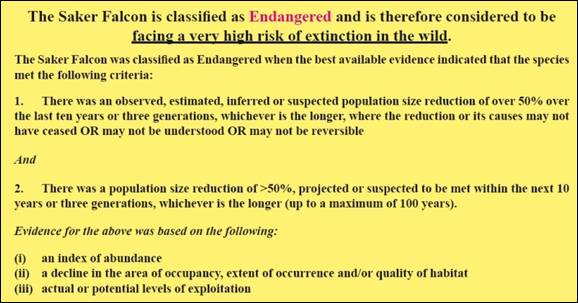 The global Saker Falcon population was estimated in 1990 to be between 8,500-12,000 pairs and in 2003 it was estimated at 3,600 to 4,000 pairs (Birdlife International, 2006). Due to the tremendous land area of some countries within the range of the Saker Falcon it is very difficult to assess overall population size by country. Data on the status of The Saker Falcon in the early 1990’s is very sparse and in many cases the data used to assess the former status in range countries was essentially little more than a guess. Little has changed in the intervening years and we still have no good measure of Saker Falcon breeding populations for many countries in its Asian breeding range.

A more recent assessment of the population status of the Saker Falcon suggests that the global breeding population lies somewhere between 8,000 to 18,000 breeding pairs.

The classification of the Saker as Endangered has focused conservation efforts and generated funding, particularly in Europe. However, its Endangered status could potentially hinder programmes to develop sustainable harvests for Arabic falconry by reducing opportunities to engage in a legal trade. Uncontrolled and unregulated illegal trade continues, irrespective of the conservation status of the Saker.