In some areas Saker Falcon populations have undergone a marked decline, whilst in other places the population has remained fairly stable or even increased. In some countries declines began in the late 19th Century through direct persecution to protect game and livestock, whilst further extensive declines occurred in the 20th Century when large areas of natural steppe habitat were converted for agriculture.

The loss of natural steppe habitat and dry grassland due to conversion to cereal crops and a decline in livestock pastoralism, has caused a marked decline in the area of suitable habitat for Saker Falcons. This has occurred particularly in parts of Europe, Russia, Kazakhstan and China.

In natural grasslands, sward length is kept short by grazing, which benefits prey species such as sousliks and Brandt’s Voles. A reduction in grazing can result in grasslands becoming overgrown and this in turn reduces the abundance and or availability of small mammal prey species. The conversion of natural grasslands to intensively managed agricultural land has lead to a marked decline in the populations and distribution ranges of certain key prey species such as sousliks.

In the forest steppe of northern Kazakhstan and southern Siberia there is a problem associated with logging of forests, some of this is illegal logging. Large trees at the forest edge are selectively removed for their timber, which reduces the available nesting places for Imperial Eagles. Imperial Eagle nests are a favourite nesting site for Sakers in these forested areas and the loss of suitable nesting places has an impact on the local breeding populations.

In addition to the loss of habitats, small mammal populations have also been impacted by systematic poisoning as means of removing perceived agricultural pests or for control of disease. This has caused a drastic reduction in prey availability for Saker Falcons in some grassland areas, especially in Kazakhstan and China.

In many areas Saker Falcons make use of electricity pylons as lookout points, perching sites and nesting platforms (where they occupy nests built by other species and nest boxes). However, electrocution on power lines is a major cause of Saker Falcon mortality. The type and design of these pylons determines the electrocution risk. Medium voltage power lines can be extremely hazardous to Saker Falcons by a combination of poor insulation and closely spaced conductors (<1.4 m apart).

The risk of electrocution on medium voltage lines can be mitigated by adopting ‘bird-friendly’ designs and/or retrospectively installing insulation.

Saker Falcon electrocuted on a power-line in Qinghai, China.

Due to the nature of the activity it is difficult to obtain data on the numbers of falcons that are illegally trapped across the globe. The major market for wild-caught Sakers is in the Middle East, with falconers in Saudi Arabia, Qatar, Bahrain, Kuwait and the United Arab Emirates as the end users of these birds. Nevertheless, an attempt has been made to quantify the extent of this falconry trade; a paper by Nigel Barton (2000) provided an insight into the level of trade that existed in the period 1983 – 1998.

Generally, female Sakers are being preferred by Arabic falconers due to their larger size, which makes them more suited to hunt large quarry such as the Houbara Bustard. Furthermore, there is a preference for juvenile falcons as they are easier to train than old birds. Illegal trappers may not distinguish between ages and sexes when catching falcons and simply obtain as many falcons as they can from their trapping sites.

Saker Falcons are trapped in their breeding areas, their wintering grounds and during their autumn migration. Many of the practices used by illegal trappers often show no regard for the welfare of wild birds of prey. Typically, a ‘noose pigeon’ is fitted with a harness that is covered in nylon nooses, which are designed to ensnare the falcon’s toes when it catches the pigeon. Many trappers use these ‘noose pigeons’ with no dragline in order to bring the birds down after entanglement. If no dragline is used and the falcon does not catch the pigeon then the pigeon is free to fly away and sooner or later another bird of prey will catch the pigeon and become entangled in the nooses and die a lingering death. 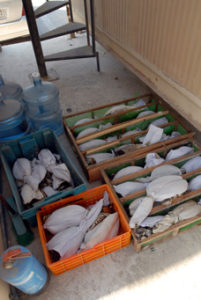 In Pakistan, Laggar Falcons are often used as a decoy or ‘barak’ to carry nooses in a feathery ball disguised as prey. Saker Falcons instinctively try to rob the Lagger of its prey and subsequently become ensnared. Other species are also used as ‘baraks’, including the Red-Headed Falcon, some kestrels, small accipiters and buzzards.

Once caught the birds are normally transported in inhumane conditions, often being drugged and bound in cloth with their eyelids stitched closed. The birds are packed into small containers with little ventilation to be smuggled across borders. Consequently, many die on the long journeys from the trapping areas to the Middle-Eastern falcon markets.

Trappers range from impoverished locals to professionals who travel widely across Europe and Asia to find falcons. The birds often pass through a series of dealers and traders before being smuggled to the Middle East. There is evidence that organised gangs are involved in the falcon trade and that these gangs can also be involved in smuggling other forms of contraband and illegal goods across borders.

Falcon confiscated in Sharjah, UAE, is examined by a veterinarian © An Pas.

In 2003 large scale poisoning occurred in Mongolia when an attempt was made to control populations of Brandt’s Voles on steppe pastureland by spreading grain laced with poison. Fortunately, this was a localised incident that has not since been repeated. More worryingly, the Chinese Government is engaged in several large scale eradication programmes of small mammals that are percieved as being agricultural pests e.g., Brandt’s Vole in Inner Mongolia, Great Gerbil in Xinjiang and Plateau Pika in Qinghai. The Plateau Pika, which is blamed as the cause for pasture degradation in the Qinghai-Tibet Plateau, is a keystone species in the region’s ecosystem. Eradication of the pikas, which are the main source of winter and summer prey for many predators in the region, will have a devastating impact on the Saker Falcons that breed and overwinter on the Plateau.

There is a theoretical risk that escaped falconry hybrids could breed with wild Sakers and that genes from these hybrids will then spread through the wild population resulting in the genetic extinction of the original wild species. Hybrids breeding with wild Sakers have been reported but at the moment there is no evidence that this has resulted in genetic introgression and the current frequency of hybridisation is thought to be very low. However, some hybrid falcons are difficult to distinguish from pure birds and in many areas outside Europe there is very little monitoring of breeding pairs, so many hybrid events may go unrecorded.

Hybrid falcons are popular amongst Arab falconers, especially in the United Arab Emirates, and their production has been instrumental in promoting the use of captive-bred falcons in Arabic falconry. The risks posed by the potential for extinction through genetic introgression must be weighed against the benefits derived from reducing the demand on wild-caught falcons by promoting the use of captive-bred birds.