Much of our work requires the use of satellite tags. These are fitted to birds and allow us to analyse their migration patterns and home range movements. These satellite tags use an advanced satellite system created by Argos.

The Argos satellite tracking system used has four components: the transmitters, satellites, computer data processing and a modem/Internet link. Satellite transmitter tag weight varies according to the species studied: for Peregrine and Saker Falcons they weigh around 18 to 22g. Normally around only 3.5 g of this is the electronics: the vast bulk consists of the high-rate solar-powered lithium battery. The tags themselves are attached to the falcon using a double-looped body harness made of Teflon ribbon. This has to be fitted very carefully. A short strong antenna projects outwards from the bird’s back and can often be seen in flight from some distance. Since the technology was first developed, the transmitters have become lighter and smaller; it is now possible to obtain 9g solar-powered transmitters. 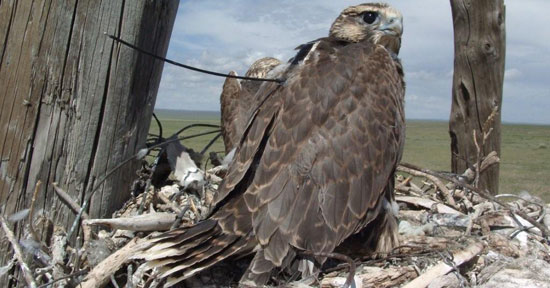 Once obtained the data can then be analysed using mapping software. Some of the units also integrate GPS capability, which means it is now possible to map both migratory and home-range movements over large distances, for long periods and across inaccessible terrain.